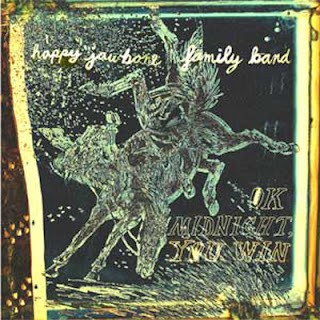 There's weird and then there is weird and wacky. Happy Jawbone Family Band fall into the latter category and you might be able to tell that by their name. This shambolic, reckless folk pop band approaches the realm of twee but seem a bit to rustic to ever be cute. Instead, the music they create seems to be held together with Scotch tape, super glue, and a lot of hope. Their album, Ok Midnight, You Win really makes no sense but is a lot of fun.

Sounding something like the Danielson Family if they were really, really drunk HJFB's songs are messy simplistic affairs that sound like they were recorded in a living room on toy instruments. Essentially just strummed guitars and off key voices, nothing about this record hints at big budgets or even professionalism. As a result, it really should sound horrible and be horrible but amazingly it is not. Rather, Ok Midnight, You Win is a sincerely fun and kooky record that may or may not have been made by roving bands of hillbillies (playing those toy instruments) and I think that's really it's charm.

The Happy Jawbone Family Band aren't complicated in their musical aspirations. Utilizing the sparsest of arrangements and talents, the band have managed to create a winsome odd record that's too riveting and unusual to pull away from. Ok Midnight, You Win is the sort of record whose honesty is what wins you over because their songwriting prowess isn't going to do it. Fun, odd, and a bit too back woods for its own good Ok Midnight, You Win is a lot of fun.
Posted by Paul POP! at 7:34 PM