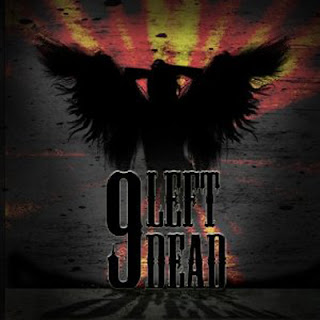 Among the more interesting band names I've come across as of late has to be 9 Left Dead. Sounding something like a news story tag line here at First Coast News, it's kind of an interesting choice for a band name. Unfortunately, for them that's about the most interesting thing about this band. As if to prove that point, their album The Wrong Things seems to be a bit too metal by numbers to be anything but, "meh."

Loaded with the same kind of chugging riffs that so many bands have recycled over and over, the songs sound like just about everything else on active rock radio. What there is within their songs to offer some degree of hope just isn't utilized enough. The band, it seems, has this seemingly strong desire to work some sort of blues into their songs and one can't help but wonder how different things would be if they went that direction. Instead, they head off in some sort of sub-nu-metal direction on a song like, "Bad Girl," that's got some horrible rapping like vocals in it and enough cliches to make Noel Gallagher look like Shakespeare. It just sounds tired.

In fact that's much of The Wrong Things...tired, old, done. Now that I think about it, this record has all The Wrong Things in it to make it even remotely good. Sorry guys, but I've heard this record, unfortunately, for the last 12 years or so and I'm kind of over it.
Posted by Paul POP! at 5:22 PM