Turn On The One AM Radio 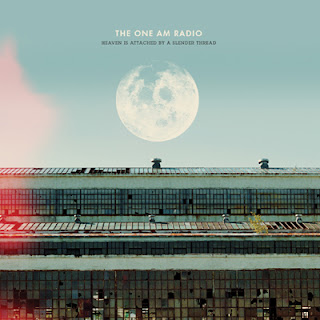 Wow. I'm in disbelief. I'm with out speech. The One AM Radio have created an album that has literally blown me away. Heaven Is Attached By a Slender Thread is a fantastic album of lush luxurious pop music that if it were a fabric would be velvet.

With gurgling synths, stylish swathes of sound, "ooh's, aah," and hand-claps in significant abundance this is an album that is filled with good feelings and sunny days. Perhaps a bit introspective, Heaven Is Attached By a Slender Thread will remind many of early Phoenix, Tahiti 80, Figurine or even Papas Fritas albums. It's geeky lovelorn pop that want's to be sexy but isn't quite sure if it should be or if it even knows how to be but tries anyway. That effort is our gain because we're given an album of seductively sweet synth pop songs that soar on the bands bittersweet nature.

The One AM Radio have created an album of opulent pop that could be the most heartbreakingly depressing record on the planet, but it wouldn't know it because of the beauty and sweetness that is gushing out of the songs here. Heaven Is Attached By a Slender Thread is an amazing album that pulls out all the indie pop stops to achieve this blissful state and that's OK. From sighed girl/boy vocals to the aforementioned swathes of sound it's all employed here to create that velvety atmosphere that will make your heart melt. If it were possible to have a crush on a record...we'd have one on Heaven Is Attached By a Slender Thread; it's that amazing.
Posted by Paul POP! at 7:43 PM

Email ThisBlogThis!Share to TwitterShare to FacebookShare to Pinterest
Labels: one am radio