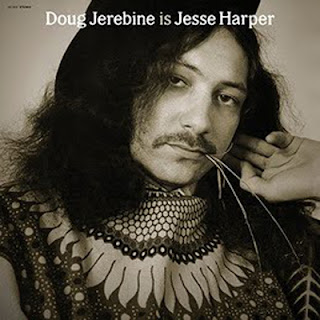 Who is Jesse Harper? Doug Jerebine is Jesse Harper. And who is Doug Jerebine? born in rural Tangowahine, New Zealand, Doug became one of New Zealand's premier guitarist. In 1969 the world was about to be his when a proposed meeting between him and Atlantic Records fell through and Doug's debut album never saw the light of day. Now through the magic of archivists, technology and the fine folks at Drag City, Jesse Harper has finally seen the light of day.

Answering the question what would have Jimi Hendrix sounded like if he were white and a Kiwi, Doug Jerebine so embraces what Jimi was all about you'd swear his ghost was inside of him. The guitar work, the hazy vibes, it's all here and it's simply awe inspiring. Jesse Harper is a very 60's record and is groovy in all the right places and it's as if Electric Ladyland was in Auckland instead of Jimi's mind.

Packed with appregiated riffs, psychedelic imagery, and tons and tons of jams, Jesse Harper is a non-stop guitar work out of epic proportions. This dude can play and play he does; his songs have emotion, grooves, psychedelic love, and lots of guitar fireworks. Clearly way ahead of his time, Doug Jerebine would have been, could have been a guitar legend had this record every come out. That being said, this is a fantastic record and while I'm not sure how Drag City stumbled across it, I'm damn glad they did. If you like classic rock, Hendrix, or just really good guitar playing do yourself a favor and pick up this lost classic...you won't regret it.
Posted by Paul POP! at 8:36 PM