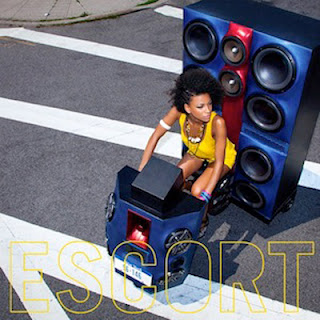 Despite it being impossible, do you wish that Donna Summer and Georgio Moroder would work together once again? Well say hello to Escort...they're your new disco buddies. No other band I've heard recently embraces that dynamic duo better than these guys. Writing songs as if it were still 1980, Escort have a retro-futurist sound that feels like it came from the great big dance floor in the sky.

Escort is a seventeen-member “disco orchestra”, founded by producers Eugene Cho and Dan Balis, and fronted by lead singer Adeline Michèle. The group features an incredible cast of musicians who have played with everyone from indie-rock titans Arcade Fire to avant-classical luminaries Alarm Will Sound and everyone in between. Their sound is so incomprehensibly funky that George Clinton has decided to just give up rather than try and compete with these guys. Just about every song is so rooted in late 70's early 80's funk, disco, or soul music that you can almost smell the musk coming through your speakers.

Escort is a phenomenal album that explodes out of the gate and never looks back. Each of the eleven songs here is a floor filler and is infectiously impossible to escape from. Covered in glitter and polyester this is the sound of the Studio 54 if it were still around today. And while some of the lyrics are just downright cheesy, "Cocaine Blues," for example, the grooves just overpower the cheese and body slam you on the dance floor.

Awesome stuff from beginning to end, this is an album and a band firing on all cylinders. They know how to make you move and while they might be thoroughly modern in every other sense, this is one band that undoubtedly has it's heart in the discotheques of the 70's and 80's. If you like to dance, put on your boogie shoes and dance the night away with your new Escort.
Posted by Paul POP! at 10:52 AM

Email ThisBlogThis!Share to TwitterShare to FacebookShare to Pinterest
Labels: escort