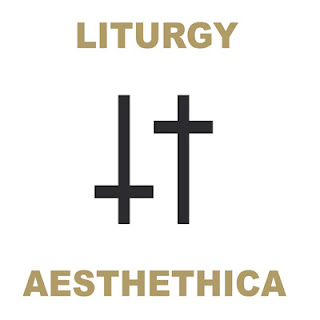 Liturgy are not a bunch of Catholic balladeers nor are they a bunch of scholars who have studied biblical texts for insight into life. Oh no, this band of black metallers come from the opposite end of the spectrum, which you might be able to tell by the cover image above. Evil yes...good no. What's most odd about this band is that they appear on the leading label of post indie rock in the United States. When one thinks of metal one does not think of Thrill Jockey Records but of Nuclear Blast; yet here they are in all their unholy glory wailing like a banshee set free on the same label that brought us Bonnie Prince Billy.

Liturgy's new album, Aesthetica is a chaotic wall of metallic noise that sounds like it was delivered from the pits of hell via an echo chamber. I guess that's why they're a black metal band as opposed to just normal death metal...that unholy chaos that reigns over this record that sounds like the undead screaming for vengeance. While there are moments spread throughout this album that could fit into a very broad definition of post rock, ambient, drone and the like (droney guitars, sheets of noise, etc) the album retains a heaviness and lack of good production that keeps it firmly in the black metal camp. With strained vocals, guitar harmonizing, tinny drums being bashed, and a general sense of the apocalypse the band do a good job of convincing us that despite being on Thrill Jockey they are most definitely metal.

Aesthetica is an extreme metal album that for the most part lacks the catchiness, hooks, and the melodic nature of pure death metal. That’s really nothing new for the genre. This is the sound of hell unleashed and after spending forty five minutes with Liturgy I was reminded why black metal caught on in the nineties; the sheer raw mayhem. Liturgy are not bad at what they do and Aesthetica is evil incarnate let free to cause a wave of metallic destruction.

If you've ever wanted to see what this looks like live you'll have your chance on February 9th as the band will storm Freebird Cafe w/Sleigh Bells and Diplo...yeah how that one got worked out is beyond me.
Posted by Paul POP! at 7:02 AM

Email ThisBlogThis!Share to TwitterShare to FacebookShare to Pinterest
Labels: liturgy