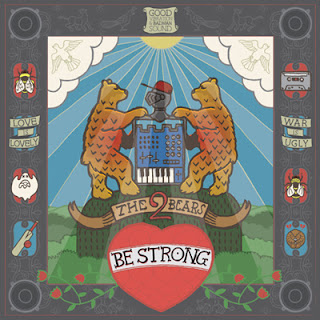 In this day and age of dubstep and “electro house,” it seems that good old fashioned proper house and garage music have disappeared. As fate would have it, that's not the case at all, it's just that media and blogosphere have forgotten how seductive these sounds are and stopped covering it. 2 Bears a London production duo made up of Joe Goddard of Hot Chip and Raf Daddy have thrown on a couple of bear suits, dug out all their favorite 80's and 90's Chicago house records and made one heck of a tribute to it on their new album Be Strong.

An album laden with incessant mind numbingly sexy grooves, Be Strong harks back to the days when dancing was fun and when dance music was about energy and movement not excessive noise and wobble. While influenced by the Chicago and New York scenes, the album is most definitely rooted in the London underground scene and you can tell. Ridiculously deep at times and so upfront at others this is a record that weaves and bobs around sub genres faster than an Intercity 125. Garage, electro, piano house, disco house, deep house, it's all here and represented so well that you can't help but throw your hands up in the air and just move.

In addition to the ridiculously addictive grooves that are so persistent the album works because the 2 Bears are able to write instantly memorable lyrics that pump along to the rhythm and drill themselves into your subconscious. Even at their deepest and most chilled moments Be Strong remains, um, strong. Pretty much the party album of 2012 thus far, the 2 Bears have brought proper house, electro, and garage back and pumped it up a few notches. This record is so flawless and so filled with banger after banger that it couldn't not fill a dancefloor if it tried. Essential.
Posted by Paul POP! at 6:04 AM

Email ThisBlogThis!Share to TwitterShare to FacebookShare to Pinterest
Labels: 2 bears