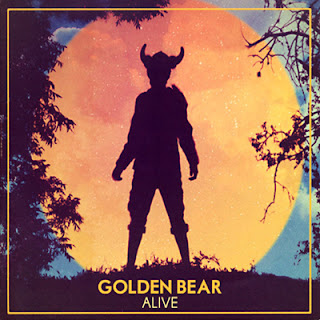 Golden Bear have been in hibernation since 2007 when they released their last album, To The Farthest Star. Four years and a long rest later, the Bears have woken up, put together a new album and are tan, rested, and ready to conquer the music industry. Their new album, Alive seems to be appropriately titled as it proves a) that the band still is alive and b) proves they still write vibrant pop no matter how long they're away.

Sounding something like a Grandaddy meets Flaming Lips hybrid, Golden Bair have the slightly left-field pop thing working for them in full effect. With slightly dazed and confused vocals, slightly psychedelic instrumentation, and songs that sound like, "Yoshimi," the band are spacey in all the best ways. Alive takes this slightly odd approach in stride and keeps its melodies easy to remember and riffs catchier than the flu. This of course makes for a dandy of an album and so little of Alive lacks vibrancy that it's hard to find fault with anything here.

Slightly weird with elements of indie pop and psychedelic rock coexisting in harmony, Alive is the kind of record that Wayne Coyne probably listens to at home in his castle. Golden Bear may have been away for four years and disappeared off our radar during that time, but Alive proves these guys still have it and are able to tap into the great quirky songwriting pool whenever they want. An impressive album Alive will make you feel...err...alive.
Posted by Paul POP! at 5:13 PM