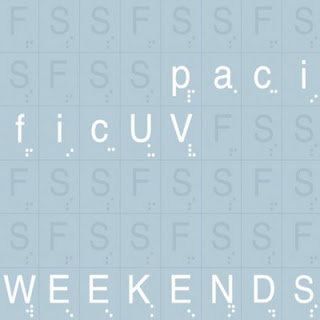 Pacific UV are one of those bands that I've been following forever. They've come a long, long way since I first saw them way back in 2003 at MacRock in Virginia. Back then I was blown away by their airy, post gazing pop. Eight years later, I'm proud to report the band is still going strong and even released a new album. Entitled, Weekends, the band has taken their post gazing pop and made it just about post everything.

Evolving from being just another revivalist band into something far greater than the sum of their parts, Pacific UV have turned into a unit centered around atmospherics and beauty. Weekends is a gorgeous droney, post rocky, post gazing, post synthpop record that veers into ambient territory with textural passages, swirling drawn out guitars, washes of sound and detached vocals. Perhaps sounding a bit like Spiritualized at their drugged out best, the band sounds as if the UV rays in their name transported them into space.

The songs here are weightless, meandering, and beautiful and Weekends as a result feels like a dream. Absolutely gorgeous from start to end, this record displays the magic of the guitar and what's possible with it. When you throw in a vocoder, a synthesizer, and what sounds like a drum machine you're talking one magic record here. From the robotic beauty of, "Ballerina," to the spacey isolation of, "Just 4 Kix," Pacific UV demonstrate themselves to be masters of their rather expansive domain.

Weekends is a fantastic post-everything record that drifts along in the heavens. It's gorgeous washes and sheens create a world in which effects, drones, riffs, and chords are allowed to float freely. Pacific UV have indeed come a long, long way since I first saw them. It's amazing what maturity does to band but I'm glad it does it. Weekends is one record worth spending a weekend with.
Posted by Paul POP! at 3:55 PM