Hurry Up M83 Are Dreaming 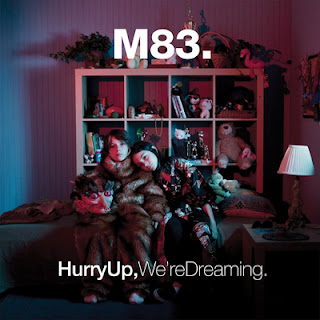 M83 have stepped up their game so much over their last couple of albums that it's hard to believe that these guys were once just another downtempo, ambient, blah blah, chill out band. On their last album, Saturdays = Youth the band figured out there was much more to life then being chilled out all the time and the results were stunning. Now after a couple of years away from that record the mighty M83 have done it again. Hurry Up, We're Dreaming is yet another impressive release that sees M83 expanding upon their new found energy and upping the ante.

A massive, sprawling album Hurry Up, We're Dreaming is 22 songs long and sees the band being exceptionally imaginative and creative in their use of electronics, guitars, vocals, ambiance, and pop hooks. Divided over two discs, Hurry Up, We're Dreaming pretty much defines what an epic album is; it's such an expansive affair the thing should have been a box set. In love with dance music as much as worldly influences M83 combine the two into a swirling mix of stuff that almost sounds like an old Police album with synths layered on top. It's amazing stuff that's like listening to the best dream you've never had. It's only appropriate then that the album is actually called Hurry Up, We're Dreaming because it's an ethereal masterpiece that your subconscious will have a field day with.

Either disc is a post chill out electronic expedition into the mind of M83 and it's a journey that you won't want to miss. From exapnsive soundscapes to lush washes of sound and then to proper pop songs, Hurry Up, We're Dreaming is M83's masterpiece. This is a magnificent album that surrounds your senses and transports you to another world and whether or not it's a Vangelis like moment or a Vampire Weekend-like one, Hurry Up, We're Dreaming is always entertaining. M83 has come so far from their unobtrusive beginnings, they've evolved into creative geniuses who are unafraid to take the sounds they love and combine them into something epic. They've done that here and I suspect will continue to do so over their career which leaves me to believe that M83 are one of those bands that you want, nay need, to follow.
Posted by Paul POP! at 5:52 PM

Email ThisBlogThis!Share to TwitterShare to FacebookShare to Pinterest
Labels: m83