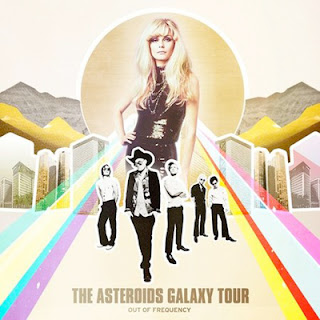 You would think with a band name like Asteroid Galaxy Tour you'd be set up to listen to mighty space jams from the far reaches of space. If I were to judge a book by its name then by all means I should be listening to prog rock of epic proportions right now and not slightly weird Scandinavian indie pop. Yes, it's true the Asteroid Galaxy Tour do not have one ounce of prog rock flowing in their veins...but they do have a severe sense of what makes quirkily good indie pop and they have the pumping throughout their system. Their album, Out of Frequency is amongst the more unusual amalgamations of pop music to come across my desk in quite some time.

Out of Frequency takes 60's pop, Barbarella, modern indie pop, Sneaker Pimps, rock and roll, and just about everything else except the kitchen sink and smashes it all together to create something that's so energetic, uppity, and saccharine sweet that it's impossible not to fall for. The Asteroid Galaxy Tour, led by Mette Lindberg, are so hip shakingly cool and so easily slide genres next to other genres and sounds next to sounds that the pop hooks come and clobber you on the head whether you want them to or not. With lots of 60's flower power, pseudo psychedelia, organ jams, hyper rhythms and Mette's rather unique high pitched voice Out of Frequency constantly hypnotizes as it entertains.

The 60's hasn't sounded this cool since, well um, the 60's and Asteroids Galaxy Tour's ability to fuse modern sounds and make them sound fashionably vintage is awesome. Out of Frequency is a fantastic groovy pop album that would almost make the members of St. Etienne blush for its sheer gall to try and sound old. While this is no Foxbase Alpha it is a darn good indie pop record and anyone who likes cute cuddly vocals, swingin' songs, and groovy vibes will love this record, much like I do.
Posted by Paul POP! at 6:57 AM