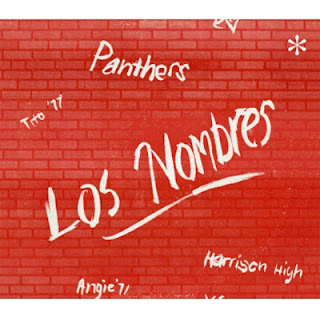 The Nombres are yet another treasure unearthed by the fine folks from the Numero Group. Formed in the suburbs of Ohio, this multi-cultural band of Puerto Ricans embraced rock and roll and soul with vigor and struggled for years to have their voices heard outside of their home state. Now nearly forty years later they're destined to be heard everywhere as their album Nombres has been re-mastered and re-released giving this band of brothers and friends their due.

Nombres is filled with Latin flavor and allows the rock and soul they created to have a slightly jazzy and soulful feel to it. Full of jam session vibes and mellow come downs Nombres is a groovy treat that sounds as if the band had so much fun creating music they couldn't quite stop making it. With organ solos, wah guitar solos, fuzzy bass lines, and just about everything else under the sun, The Nombres get the funk out and then some all the while adding tropical flavors and sunshine to every song. This is a great record that sounds so far ahead of it's time; think about it the quantity of Latin soul/rock artists in America in the late 60's early/mid 70's was pretty much limited to, um, Santana.

The Nombres are an awesome band and they rip it up throughout Nombres. As Diego Martinez would say, "You might outplay us, but you couldn't out entertain us." Listening to this album I'd have to agree. The fun these guys are having here just oozes out of every song and they are so good at what they do how could they not? It's truly a shame that the band never got the respect and popularity it should have because these guys were such stellar musicians and songwriters it seems unjust.

Filled with grooves, soul, rock and roll spirit, Latin influences and just about everything else The Nombres were and are one heck of a band. It's pretty awesome that Numero found this record and has given it the respect it's owed. If you like vintage rocky soul funk, Like most Numero albums, The Nombres re-release is pretty much essential.
Posted by Paul POP! at 6:30 AM

Email ThisBlogThis!Share to TwitterShare to FacebookShare to Pinterest
Labels: the nombres