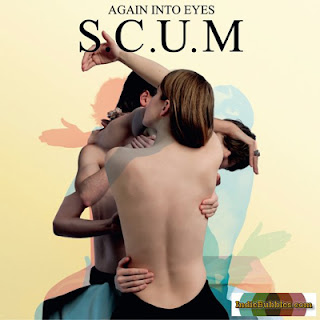 When naming your band it's best to stay away from words like crap, dirt, suck, and Scum. I mean you just kind of set yourself up for bad things when you come up with a name like that. Thankfully for S.C.U.M. there is not a lot of bad things you can say about these guys as they have the songs to back up their rather derogatory name. Their album Again Into Eyes is anything but scummy and shows it all to be some sort of ironic inside joke.

Again Into Eyes is a post shoegazing dream had by gothic angels. It's an ethereal hazy record that sounds like a groggy sunrise after a night on the tiles. Like a comedown of epic proportions this is the sound of a never ending stretch in the great beyond. With gauzy, reverbed guitars, swirling around the strung out vocals of Thomas Cohen the album wafts along in an ever so artful way that's as haunting as it is beautiful.

S.C.U.M. have recorded the soundtrack to the afterlife and we're privaleged to have it amongst us. This darkly delicious record swirls, blurs, and wraps itself around effects pedals, distortion, plodding drums, and deadpan vocals and it's something that's breathtaking in a scary kind of way. I enjoyed Again Into Eyes and it's post-gazing soundscapes; it's a beautiful record that's moving, spiritual, and at the end of the day a bit frightening.
Posted by Paul POP! at 8:13 PM

Email ThisBlogThis!Share to TwitterShare to FacebookShare to Pinterest
Labels: scum