Ume Deals With Its Phantoms 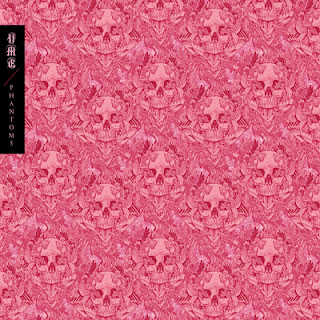 Ume is one heck of a band. I've not heard a band that so successfully mixes electro, shoegazing, and post punk than this band does. Their album Phantoms is a blindingly good mix of modern sounds that crystallize together to form stylistically cool and angular tunes that you can shuffle around to. Despite their use of what I call scene imagery the band still manages to steer away from those clichés musically and come up with something that might not be pretty to look at (pink skulls anyone?) but is most definitely worth listening to.

Phantoms sounds like Metric if they used less electronics and more delay pedals and they attacked the resulting sounds with an axe. It is post shoe punk gazing that loses itself in a sheet of noise that's almost similar to the imagery on the cover. This is awesome stuff that's loud, distorted and washes over you so readily that it's impossible not to be hypnotized by vocalist/guitarist Lauren Larson's caresses. Lauren and her band construct these abstract tunes that rebound off one another in an almost atomic reaction that eventually sees riffs and sounds explode into melodic musicality. It's awesome stuff and while Ume is undoubtedly noisy they still find room for a pop hook or twenty which hovers over the chaos in the background as if by magic and makes the whole thing stick to your brain.

Phantoms is an impressive effort from Ume. Channeling angularity, aggressiveness, and mysticism all at the same time, Ume creates a beguiling sound that's beautiful no matter how noisy it gets. It might look a little weird and it might sound like a freight train but Phantoms is one of my favorite albums this year and if you give it half a chance it will be yours too.
Posted by Paul POP! at 9:07 AM

Email ThisBlogThis!Share to TwitterShare to FacebookShare to Pinterest
Labels: ume