Proof I Exist and Suburban Sci-Fi 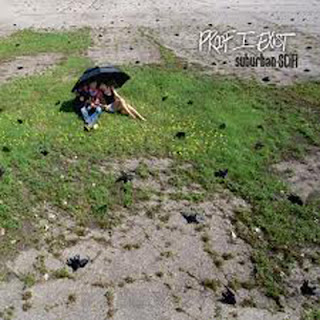 Proof I Exist answers the question if I'm a solo artist and I make record by myself do I exist? Well Suburban Sci-Fi would seem to answer that question with a resounding yes. Proof I Exist is Paul Kulis who single handedly and painstakingly pieced this record together in his basement using all live instrumentation and a bit of computer magic. The results are a fun record that taps into its inner indie pop fan and then tells a tale to the joys of DIY.

Sounding at times like Neutral Milk Hotel and at others like a bit of a twee pop band, Proof I Exist are a jangly, jolly, frivolous, and fun band that sounds much larger than the sum of its parts. Suburban Sci-Fi fully embraces its bedsit or basement pop and runs with it. This is a record that embraces the honesty and purity of every song here and the craft of making each of these tunes really helps this thing succeed. It's not flash, it's not huge, it's not overly produced it's just an honest to goodness power pop record that's filled with great choruses, quirky hooks and songs that will have you pogoing around.

Kulis has proven he exists and done a darn good job of it. Suburban Sci-Fi is a well rounded effort that shows Proof I Exist can do it all and do it well. Who needs a band when you've got a basement, time, and the ability to play everything? Not Proof I Exist, that’s for sure.
Posted by Paul POP! at 2:28 PM

Email ThisBlogThis!Share to TwitterShare to FacebookShare to Pinterest
Labels: proof i exist