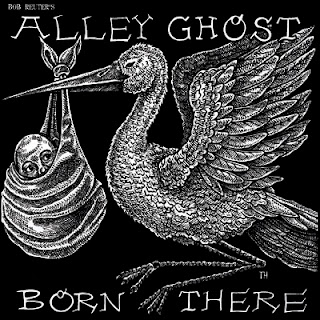 Bob Reuter is an old master of rock and roll and his latest album as part of Alley Ghost demonstrates that. Born There is an old time romp through the history of rock and roll up until about 1969. It's garage rock the way it's meant to be played with a bit of spit and polish and it’s done with a band that looks half his age; it’s as if he's teaching them on the way rock and roll should be played which is pretty darn cool.

With a range that covers everything from twangy countrified rock to the Stones to stuff that sounds like Lou Reed fronting the VU, Reuter and Alley Ghost truly cover all their bases. The songs are energetic, rambunctious and fresh no matter how rooted they are in the past. Born There is packed with enough harmonica playing, bluesy guitar solos, noisy drums, and roughshod vocals to make you wonder if this whole thing wasn't actually recorded forty or so years ago. From the Stones rhythm and blues rock of, "Cheap Infatuation," to the boogietastic, "Berta," this is a record that's so packed with vintage vibes it can barely contain itself.

Born There is a classic of sorts. With songs clearly influenced by the past and founder, Bob Reuter's forty year career in rock and roll how could it not be? Thanks to his backing band of youngsters the songs are given a modern edge to them without losing their character or old patina. Alley Ghost is the genuine article and Born There only stands to add to Bob Reuter's legacy.
Posted by Paul POP! at 9:01 AM