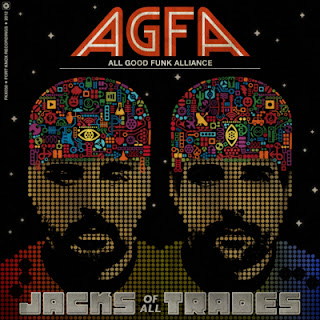 Seemingly named after a brand of film, the photographically named AGFA or the All Good Funk Alliance bring the chilled out hip hop grooves and funk and let them develop into something that's classic sounding without being too retro. Their latest album Jack Of All Trades plays just like the name would imply as a mish mash of styles mixed into a bit of everything stylee. These guys are Jack of all trades as they fear no genre or template but rather let the music and their ideas take them where they want to go.

Jack Of All Trades is an incredibly diverse record that sounds like Dee Lite, early 90's hip hop, chill out, and pure funk all at the same time. It truly is very good as AGFA fire on all cylinders here and lay down such addictively groovy tunes that if you're feet don't move and your ears don't perk up then you might just be dead. This is a party barely contained within the thirteen songs that make Jack Of All Trades up. I love the fact that the band so easily shift focus and take the funk in all sorts of cool direction...it flows like Niagara Falls and it kills.

From bongos, record scratching, synths, hip hop vocals, funky bass lines, driving drums and everything in between AGFA have created a record in Jack Of All Trades that will satisfy everyone's desire to get down. It's all here and it's all too darn funky. This is a record that inspires movement and energy and that's because it's got both by the ton. If you were to look up perfectly chilled funk in the dictionary of musical genre's you would see the All Good Funk Alliance hosting a trophy high. This is simply an awesome record that you need in your life.
Posted by Paul POP! at 2:39 PM

Email ThisBlogThis!Share to TwitterShare to FacebookShare to Pinterest
Labels: all good funk alliance