The Bombay Royale, You, Me, Bullets, Love 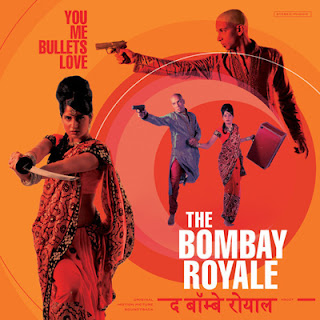 The Bombay Royale are awesome. Period. If Quentin Taratino were to ever do a Bollywood-like film, I’m fairly confident that they would be the Chief Music Supervisors. No other band I've heard takes Bollywood energy, sixties surf rock, and modern day production values to come up with something so amazingly cool that you'll want to run off to India to be part of the action. Their album You Me Bullets Love even sounds like a movie.

With horns, spy funk, twangy surf guitars, Indian mysticism and a sense that the world is out to get you The Bombay Royale create tunes that play out like scenes in a thrilling movie. There's action, drama, love, musical plot twists, and everything you'd expect in something like a Tarantino flick. This is awesome stuff that mixes instrumental atmospherics, vocal seduction, and a flair for the dramatic to make its point and makes it, it does. You Me Bullets Love is amazing. It's brash, energetic, creative, and diverse. I mean think about it...the band sound as if they're in the heart of India one second then the scene changes and they're in 60's California. Wow...they're good.

You Me Bullets Love simply needs to find its way into the hands of Tarantino. This is perfect for him. Such an action packed record deserves to have a movie made around it. All the leg work is done; it just needs dialogue and choreography. Heck even the cover looks like a thriller come to life. If you love action, drama, love, and mayhem all in a record then The Bombay Royale has conveniently placed that all on You Me Bullets Love. If you're a director looking for a soundtrack, I'm sure there are licensing opportunities available. You Me Bullets Love is masterful, end of story.
Posted by Paul POP! at 2:42 PM