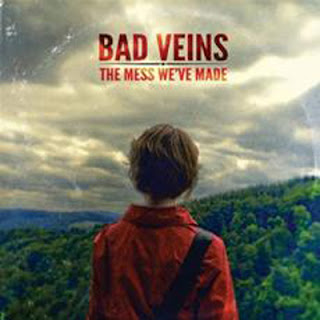 Normally when I have blood drawn for whatever reason the nurse always compliments me on how good my veins are. I really never know how to take it as it's just kind of gross all the way around but at least she's not saying I have bad veins. Well, truth be told, I do have Bad Veins. Not in the traditional sense but in the musical one. This two piece band with assistance from a tape machine create music that might be bad for you but darn it if it doesn't sound great. I've got their latest album The Mess We Made and it's like the best thing that The Feelings never released.

Slighty sappy, uber melodic, and syrupy sweet this is a record that sounds bigger than its two members should be able to make. This is an upbeat record that has no problems laying in the strings on top of strings, adding multipart harmonies, and then creating hooks the size of Texas. These guys sound like a million bucks despite costing about 1000. Honestly, The Mess We Made is anything but a mess. In fact, it's a brilliant slice of melodic indie rock that no matter how widescreen or orchestral it tries to be it never loses sight of its pop sensibility.

For just a duo, Bad Veins have a sound that's so much larger than they are it's hard to comprehend. How two people (and a tape machine) can create such charming, alluring, and large sounding songs is beyond me but they do and do such a good job of it, you'd never know it was just a duo. The Mess We Made is a great record that is epic in scope and huge in melody; it's a record that has it all and has more than that just because. This is music to swoon to and music to fall in love to; it's heartwarming and fun and no matter how big the mess Bad Veins make it's totally worth it when it's this good.
Posted by Paul POP! at 9:32 AM