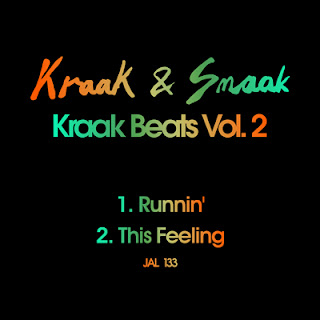 The rather hilariously named Kraak & Smaak are known for setting dance floors alight with their disco house grooves. Their latest single Runnin' is really be no different. At times reminding me of classic Blockster tunes, K&S lay down funky grooves with a driving house beat that wouldn't sound out of place on one of a zillion Hed Kandi comps from the late 90's or playing in the bachelor pad of someone like Alex Gopher. This is potentially classic stuff delivered with high gloss and a sheen of disco goodness.

Runnin' consists of three incredibly catchy, and more importantly, funky tracks that are so perfectly fined tuned to set that glammy, housed up vibe that Cream should have these guys as permanent residents. While the tracks differ on the level of deepness ("This Feeling," being a bit more deep and atmospheric than "Runnin'") they all are simply amazing in whatever manner you play them. An impressive single all the way through, Kraak & Smaak prove that disco house is alive and well and apparently living it up in style.
Posted by Paul POP! at 9:11 AM

Email ThisBlogThis!Share to TwitterShare to FacebookShare to Pinterest
Labels: kraak and smaak