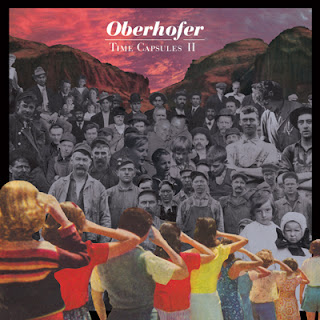 Oberhofer despite having a rather Germanic name does not play dubstep polkas for a new generation. Oh no, this band founded by 21 year old Brad Oberhofer is far to chipper and his album Time Capsules II is a raucous rumble through pop music. It's all ramshackle, rambunctious, jolly, and jangly stuff that finds inspiration in Brian Wilson's brain and Descartes works on philosophy. This is a bold and intelligent record that's been brought to life by someone barely old enough drink.

Time Capsules II doesn't feel nor sounds like a debut album. Rather this is a work that sounds like it's the second or third album of a prolific artist. This is deeply personal stuff that comes from the belief that you spend your life looking for the socially aware version of the five year old you. It's a philosophical and thought inducing, yet extremely catchy and frivolous, pop music. The guy clearly has a brain on his head and knows how to write a darn good song to boot. Time Capsules II as a result is a perpetually rewarding experience of energetic and thoughtful gems.

With seemingly multi-part harmonies, a degree of tweeness, a bit of shyness, a deep rooted quest for meaning and songs that have enough of oohing and ahhing to last a lifetime, Time Capsules II fires on all cylinders and never lets the listener down. Oberhofer has created an impressive debut that's in love with pop music as much as it is with youth. It's warm and fun and despite some of the weighty lyrics that permeate it, it's brimming with sunshine. This is the sort of record that should be placed in a time capsule to remind us decades from now that no matter how bad things got, there was still great music being made.
Posted by Paul POP! at 2:14 PM

Email ThisBlogThis!Share to TwitterShare to FacebookShare to Pinterest
Labels: oberhofer