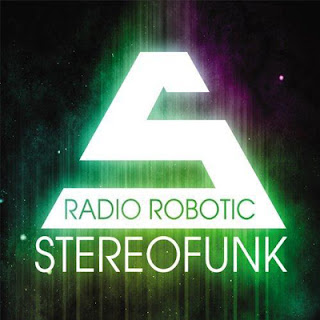 You know, you should never judge a book by its cover and thank heavens I didn't when it came to the rather tritely named Stereofunk. Despite their uber-generic name the band pack a huge electro punch that kills and had I just skipped over this (because of their name) I would have missed out on this electronic battle weapon of epic proportions. As it turns out, Stereofunk's album Radio Robotic is a series of hits strung together in rapid succession that are so infectious you'll need to talk two Tylenol and call your doctor in the morning after listening to it.

Radio Robotic harks back to when electro, synth pop, and house were first intermingling. Think Daft Punkish tunes on a bit of a pop slant and you have an idea of where Stereofunk are coming from. They write absolutely gargantuan tunes with hooks that are even bigger and they come at you at such speed that your ears can barely keep up. The synths are lush, with squiggles, loops, stabs and sounds ricocheting all around you to create an atmospheric layer with beats that are solid and four to the floor. Throw in the occasional hip hop vibe, trance hook, or commercial banger and you have Radio Robotic wrapped up in a neat little package. With eleven tracks and eleven potential singles this is a non-stop dance off where the only test is whether or not you'll have enough energy to make it to the end.

With an exhausting and diverse array of influences and sounds Stereofunk throw aside their name and create songs that are guaranteed floor fillers and the kind of thing that could bail out any DJ in any situation. How? Well Radio Robotic is packed with tunes that move and it's nigh impossible to resist their ability to make you do that. It's rare to hear a dance music album where every tune is incredibly good, but Stereofunk have created one and it's apparent they've sunk an enormous amount of energy, creativity, and grooves into every song on Radio Robotic. This is a fantastic record that awaits anyone who manages to get over their name.
Posted by Paul POP! at 10:04 AM

Email ThisBlogThis!Share to TwitterShare to FacebookShare to Pinterest
Labels: stereofunk