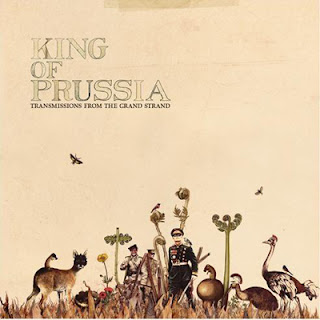 The King of Prussia is holding court with their new album Transmissions From The Grand Strand and by royal decree you must attend. With a flair for dramatic, arty, chamber pop The King of Prussia strum away in a breezy fashion and the resulting songs they come up with are airy, light on the ears and almost twee. This is winsome and fragile pop music that's just a bit overwrought with emotion.

Transmissions From The Grand Strand is the sort of thing that the Ocean Blue would have recorded back in it's heyday and the kind of record that someone like Slumberland would issue today. This is delicately cool pop that's sweeping and atmospheric without getting too lost in itself. Despite its emotions and sense of artful drama, The King of Prussia never loses site of the fact that each song needs to be memorable and not get lost in it. The fact that you can hum along to each of these songs and remember them despite them being so twee that they might be blown away in a breeze is a tribute to the bands songwriting ability.

Email ThisBlogThis!Share to TwitterShare to FacebookShare to Pinterest
Labels: king of prussia