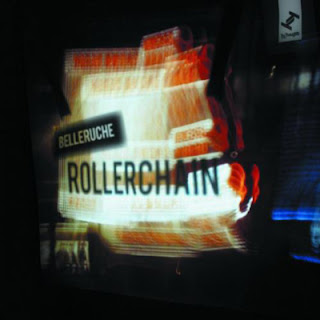 Belleruche are an interesting study in dynamics. This is a group who has no problems dipping their indie into a side dish of trip hop and then running the whole thing through a European accent of some sort while speeding up and slowing tempos on mere whims. As its name implies, the bands album Rollerchain is one album that's gone off the chain and is so good that one listen to it simply isn't good enough.

Rollerchain is seductive as all heck and vocalist Kathrin deBoer is so incredibly sexy that this record verges on being explicit. The way she whispers the lyrics as the beats roll on behind her is just an emotional avalanche that's hard to overcome. If you want sexual tension in your music Belleruche have it spades here and it works so well for them that it will leave you breathless. When you're heart isn't melting or racing Belleruche finds other ways to keep you occupied. From upbeat tempos to soulful bluesy indie rock, the band tries it all and for the most part succeeds 100% of the time. Why? Well, Belleruche manage to keep things simple and allow the bass lines and beats to carry deBoer's vocals to the Promised Land. The band is really at their best, however, when they do their best Portishead and sound like some continental version of the British band; there's just something about Rollerchain that's incredible when it gets all dark and moody.

An impressive album from start to end Belleruche remind us that Portishead and the Sneaker Pimps were really good bands. Rollerchain is a fitting tribute that brings Belleruche's own interpretation of the genre to the trip hop table and cleans up. They've really done a good job here and whether it's deBoer's vocal seduction or the breaks and beats that steer them the whole thing is addictively refreshing. Trip hop might be an old genre at this point but Belleruche have no problems reminding us that it's still a great form of electronic music.
Posted by Paul POP! at 9:50 AM

Email ThisBlogThis!Share to TwitterShare to FacebookShare to Pinterest
Labels: belleruche