The New Cassettes Arrive With Winterhead 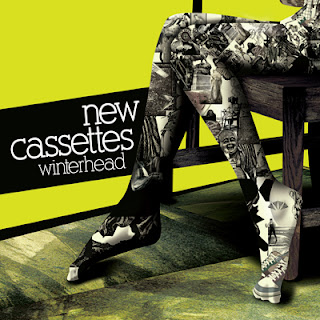 The New Cassettes aren't really new or even new sounding. In fact they might be a little late to the whole disco punk party but at least they finally made it here. Their album Winterhead would have been a massive success had it been released around 2005 with bands like Bloc Party and The Futureheads. But at a measly seven years late, they've managed to dodge overwhelming success while still managing to release one heck of a record.

Creating choppy disco punk inflected power pop New Cassettes write songs at 45 degree angles and fly their way through each song as if they were in a hurry to be somewhere else. The songs cut left, cut right, jump up and down and flood the dance floor with intense guitar work outs and memorable choruses. It's obvious after a few songs that New Cassettes clearly know how to write a danceable indie rock song that's unforgettable. They carry that on through the entire album, even when they slow things down a bit and try to get sentimental. I truly enjoy how their guitars slice their way through songs and are particularly aggressive while the rest of the band stays melodic; it's a nice dynamic that works well for these guys.

In the end, Winterhead is an absorbing and jittery record that's a thoroughly enjoyable listen. Its angularity might be a little past the sell by date, but the band overcomes that with striking song writing, huge hooks, and great guitar work. It's clear New Cassettes are very good at what they do and they're ability to mix tension with harmony is something worth hearing many, many times. Disco punk has come a long way since it's revival at the turn of the century and New Cassettes are blazing the trail forward...well at least until the new Bloc Party album comes out.
Posted by Paul POP! at 12:34 PM