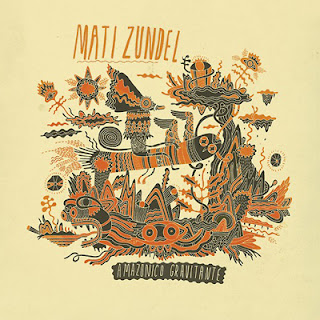 Picking up exactly where the Future Sound of Buenos Aires left off, Mati Zundel has released his solo album and much like the compilation he utilizes a rich sound palette to create a modern sound that's informed by the past as much as it is the present. Amazonico Gravitante is a lush, open minded work that mixes electronics and traditional sounds so well that the lines are blurred and the sounds difficult to detect. Amazonico Gravitante is a fascinating album from one of the most fascinating musicians on the world music stage.

Deftly blending traditions together with electronics the record takes on this totally summery chilled vibe that makes you just want to relax and enjoy life. Something that’s obviously a big part of Brazilian life? This is a lush record that barely utters a word but conveys such a strong message and such a cool set of grooves you'll find it difficult to not to enjoy it. With samples, sounds, and beats coming from every age and angle, the thing is as spread out as the continent of South America and just as mesmerizing as well. There may not be a lot of catchy tunes on this record but the unique sounds that Zundel creates are riveting and as I said earlier this is perfectly chilled world music.

Whether it's at Carnivale or in a bustling metropolis, Mati Zundel has a sound for any situation and he's filled Amazonico Gravitante with tons of them. The result is a relaxed record that never strays from your attention. If you love the idea of shabby chic even in music you'll think Mati Zundel is a genius because no else meshes old with new as well as he does on Amazonico Gravitante.
Posted by Paul POP! at 10:27 AM