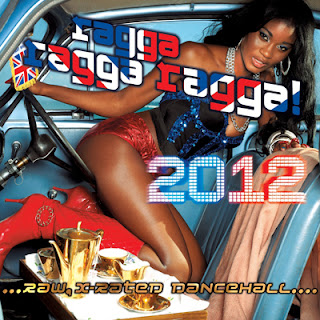 In Notting Hill this time of the year, it's time for Carnival and it's almost assured that the soundtrack to that massive gathering will include several, if not all, of the tunes that appear on Ragga Ragga Ragga! 2012. This massive two disc set of raw dancehall might be British by nature but its sound is most definitely from the Caribbean. Absolutely awesome in every possible way, this is a tropical paradise set to rough beats and vocals that are designed to get people moving either in the streets or the club.

Ragga Ragga Ragga! 2012. features 20 of the latest dancehall tracks plus a DVD detailing the UK's hottest dancehall personalities. Listening to this is like listening and then watching a documentary to the bristling dancehall scene from London and beyond. It's truly amazing how this tropical sound has made itself at home in one of the world’s greatest cities. With ruff and ragged sounds, raw and raunchy beats, hooks that catch you off guard and dancehall vocals that are simply amazing Ragga Ragga Ragga! 2012 is absolutely essential listening.

There's just something about the vocal style of dancehall artists that have always appealed to me and there's so much here on this album and now with the aid of technology they all sound crisper, cooler, and even better. I think that's one reason why I've always gravitated more toward dancehall rather than reggae...it's just a more jagged, dubby, clubby sound. It's far more energetic and groove oriented that reggae and there's no doubt that Ragga Ragga Ragga! 2012 has no shortage of either.
If you like dancehall, love carnival, or are currently living in Notting Hill then Ragga Ragga Ragga! 2012 is an essential record. VP Records have done a fine job of putting this whole thing together and it's well over an hour and a half of entertainment, dancing, and beats that will keep you moving. This is the sound of summer without a doubt.
Posted by Paul POP! at 2:39 PM