Welcome To The Codeine Velvet Club 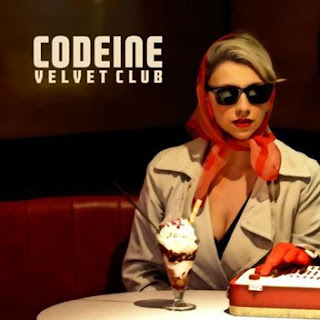 I'm not sure why, and I'm certainly not complaining, but 2010 has rapidly become the year of chamber pop. It's nice to know amongst the zillions of "new wave," revivalists and electro wanna be's that there are bands out there that still love the finer things in life; like a string section and a song that's so seductive it would make the cast of Mad Men blush. Among those leading the charge is Glasgow's Codeine Velvet Club. Made up of a Fratelli and a singer/songwriter the band take their day job musical personalities and throw them out the window to come up with something so soaked in 60's and 70's AM pop, drama, and style that you wouldn't recognize them if you tried.

Codeine Velvet Club's self titled debut album, is an orchestral, duet laden album that's stupendously stunning. At times like a long lost John Barry album and at others like a paisley filled 60's psychedelic journey, Codeine Velvet Club feels as though it was released somewhere in the summer of 1967. Sparkly and shiny on the outside but dark and mysterious on the inside, Codeine Velvet Club is a study of contrasts and things that should not be. With an epic, sweeping nature and arrangements written by fellow Scotsman, Belle & Sebastian's Mick Cooke and featuring legendary horn player Derek Watkins (who has actually played on every Bond theme), the album is lifted from being just another side project into something far more important. In fact, I'm half willing to say that Codeine Velvet Club is just as good if not better than either of the Fratelli's albums.

Call me crazy, but there's just something that's so refreshing about hearing something so textural, sexy, dramatic, and in love with the 60's. This is the sound of old glamour being taken through a wormhole and dropped into 2010. It's opulent, well written, and filled with extravagant arrangements that will leave you breathless. And as if to make a point, their version of the Stone Roses, "I Am the Resurrection," is dressed up in a smoking jacket and worth the price of the album alone. Codeine Velvet Club have done a fabulous job of piecing together a homage to a simpler and better time while writing an album to match. Codeine Velvet Club is truly an awesome experience worth taking many doses of.
Posted by Paul POP! at 9:38 AM