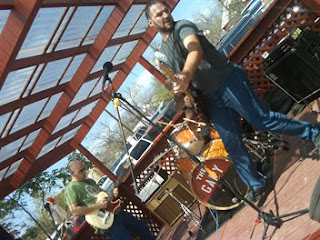 So you say you like classic indie rock? Well then have I got a band for you...The Gary. The Gary isn't one guy named Gary, but in fact a power trio whose members are named Paul, Dave, and Trey. Their origins begin on the Comal River, in July 2008. It was there and then that Paul Warner paddled over to Dave Norwood and suggested they start a band called The Gary. After several beers into their river journey, both decided it seemed like a good idea and it was at that point the band became a reality and after they later recruited Trey the band was complete and the adventure of three non-Gary's began.

Name, beer, and lazy river aside, this three piece do things the old fashioned way...they just plain rock out the way that that indie rockers used to. There's no American Apparel smugness, no angular hair cuts, just lackadaisical mind numbingly good indie rock influenced by people like GBV, Silkworm, and the whole post rock/noise rock thing. It's raw untamed stuff that's not really like anything that's out there now and that's why it's a great listen. It suffers bumps and bruises along the way and will probably end up giving you a few as well but that's the joy of their album, Logan. It's rough and tough, wants to drink a lot of beer, and then play air guitar all night. This is the way things used to be done in places like Chapel Hill 20 years ago and here these guys are attempting to bring it all back and bring it back in fine fashion.

Logan is a nervous jaunt through proper indie rock with all the choppy guitars, off key melodies, and songs that don't know where they belong. It's raw, unpolished, and sounds as if it were recorded in the span of about an hour and The Gary have done a great job here of accumulating history and bringing it bang up to date. Logan is a great record because of this and whether it's from the raw power of "QSB" or the moody baritone of, "False Sunrise," the record continually entertains in a way that only a band that plays aggressively and directly can. 1993 never sounded so good or so close...Thanks for the memories.
Posted by Paul POP! at 6:39 AM

Email ThisBlogThis!Share to TwitterShare to FacebookShare to Pinterest
Labels: the gary