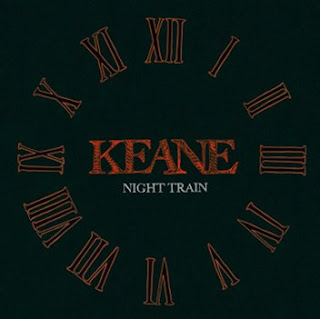 Perhaps the easiest way to describe the new Keane album, Night Train, is to say that this is not your father's Keane album. Gone are the lazy Coldplay references, the piano skullduggery, the pretty stereotypical epic British pop record. Instead, here come the synth laden atmospheric pop ditties that would almost make Chris Martin jealous. Still bigger than life, but with a renewed pop sensibility, this is Keane taking a giant leap and realizing that they've got nothing to lose. And, heck, after selling a bajillion records they can probably afford to take such risks in the name of their sanity and creativity.

Night Train is a stupendously great record. Yes, that's right I said that and I'm not ashamed to say that. There was a time, somewhere around their debut album, you couldn't have paid me to even think something like that especially seeing as though the world really only needed one Coldplay at the time. That being said, I'll stand proud here and now and say, "Wow, what a difference a few years makes." It's as if Night Train is like a pop-phonic journey with epic songs that rain down from the heavens. The hooks are huge, the choruses are ridiculously catchy, the songs stick like super glue and Keane prove themselves capable of growth, maturity, and the ability to write songs that are destined to be everywhere...once again.

There's a reason why this band has sold so many records and it's because they know how to write a tune and here they are on Night Train proving it again and again. Whether it's a sappy piano tune or a massive sugar rush complete with a hip hop breakdown, like, "Stop For a Minute," this band has simply got the knack for what makes great pop. Night Train is packed to the gills with these sorts of moments, and while there are hints at their past sound, so much of this record is emboldened with a sense of freshness, retro 80's pop, and new sounds that at times you'd almost forget who actually is playing on this album. Having listened to this a bunch, I have to honestly say I respect these guys a lot for making a record like this and challenging themselves to create something different.

Keane have come a long way, and much like Coldplay, have grown comfortable in their own skin. This comfort has allowed them to record an album like Night Train without fear. The good thing about all this, is that Night Train is a fantastic album that's pretty much going to be the soundtrack to spring. This is a bright, cheerful, upbeat album that embraces the 80's with a giant bear hug and makes it shine with that trademark Keane pop polish. Night Train might anger some old fans, but I'm pretty sure it's going to win them over a whole legion of new ones and my guess is that they would be ok with that.
Posted by Paul POP! at 6:57 AM

Email ThisBlogThis!Share to TwitterShare to FacebookShare to Pinterest
Labels: keane