Pocket Return With Jars of Fireflies 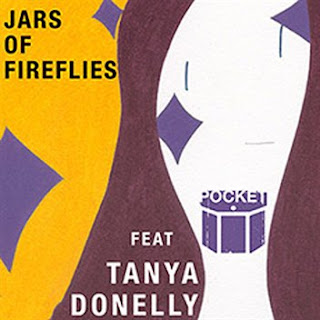 It seems like only yesterday that Pocket released their Backwards from Ten single and here they are again with yet another new one, Jars of Fireflies. This time Pocket recruits Tanya Donelly of Belly fame and Django Haskins of the Old Ceremony to help out on vocals. While Django makes a heck of a contribution to the single, the main focus of the single is Tanya's seductive croon that, quite honestly, after fifteen or so years, hasn't lost any of it's charm. That being said, it's easy to say that Jars of Fireflies is yet another feather in Pocket's cap and continues their rapidly growing catalog of fantastic singles.

"Jars of Fireflies," is a beautiful tune that would seem a bit unusual for Tanya, as she's spent most of her career with guitar in tow, but here she is lending her voice to a lush electronic track and doing a heck of a job. Swirly, ethereal, and almost like something Belly would record today, the track rolls in like a heavy fog and envelopes you with it's gorgeousness and eventually gives way to a sheet of distorted haze. It's truly great stuff in the tradition of Pocket's past efforts and doesn't disappoint. With a host of remixes coming from several artists including; Mount Sims who seem to filter the vocals, turn up the greys, and let the synths takeover, Rick Moody who throws out the original tune all together and creates a chilling minimal and atmospheric remix, and Pharmatronik who seem to do a good job at making the song a trip hoppy post shoegazing ray of sunshine that's fantastic.

On the proverbial flipside, Django Haskins adds a bluesy touch to his track, "Sleep When You Are Dead," which sees the electronics breaking in all sorts of directions with the beats rebounding of one another. Like being stuck in a echo chamber for an eternity, the song rattles around in an almost 90's New Fad's style and then breaks down into this house music like direction that carries the track into the heavens. It's a dark tune that had it been released somewhere around 1997 it would have been gargantuan.


I'm not sure if Pocket has an assembly line set up or not, but it certainly seems like they do because they're cranking out singles and hits like a factory somewhere. What's amazing about that is the fact that they're doing a heck of a job at it. With nary a duff track in the last three singles, their track record is spotless. Pocket clearly know how to write a tune and with hooks the size of Texas, and vocalists that are truly talented backing them up I'm pretty sure they'll continue to churn out singles like, Jars of Fireflies. Excellent job once again.
Posted by Paul POP! at 5:37 AM

Email ThisBlogThis!Share to TwitterShare to FacebookShare to Pinterest
Labels: pocket