Not Wasting My Education 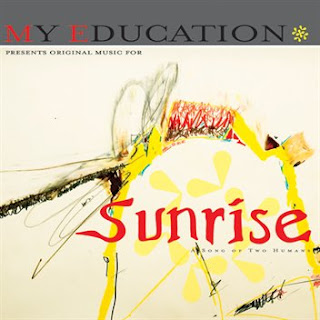 Austin, Texas instrumentalists My Education are a fascinating group of musicians who have used feedback, strings, horns, vibes, and other random percussion to create atmospheric sound sketches for the last decade. With a near cinematic quality to them, this group of players sculpt things out of sound that let your imagination run free. Having previously released five albums over the course of their career, to say that My Education are good at what they do would be an understatement. Their latest album, Sunrise, is no different and shows My Education in fine form and on top of their game by creating an imaginary tense world where dramatic textures, epic soundscapes, and widescreen songs are the norm.

Comprised of pieces from the band's original score for FW Murnau's 1927 silent film Sunrise: A Song of Two Humans the album Sunrise challenges My Education to create passages that are technically complex and fitting while maintaining an air of accessibility. That being said, Sunrise might be accessible and understandable to non-musician ears but that doesn't mean the band has toned things down. In fact, Sunrise sounds anything but small. This is a gargantuan, complex record with depth, width, and a massive scope. Perfected over the course of two years through live scoring, My Education was able to hone each of the songs into a textural ambient behemoth that allows the band to not only show off their technical prowess but their thought processes and ideas as well.

Sunrise is an ambient journey that functions well not only as a soundtrack but as a stand alone aural journey for the imagination. It's epic songs create a world that's rustic, stark, and seems to be vast and never-ending. There might not be a word spoken on this album but over the course of seven songs, My Education have written a record that's almost too powerful for words. Their folky and tense textures are orchestrated to perfection with unnerving results and that's what makes so much of Sunrise an awesome listen. Fans of folks like Pelican, Robert Fripp, Brian Eno, and the like will find this record an amazing achievement that demonstrates just how good My Education have quietly become over the last decade.
Posted by Paul POP! at 5:32 AM

Email ThisBlogThis!Share to TwitterShare to FacebookShare to Pinterest
Labels: my education