Monster Movie Know Everyone Is A Ghost 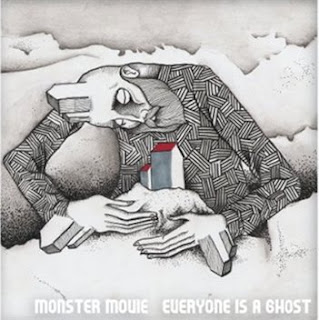 Christian Savill of Slowdive never gave up music when his most famous band called it a day. Oh no, rather than pack it in, Savill continued working with his partner in musical crime, Sean Hewson for well over twenty years. Over that span of time together, they've put together a resume of feedback driven guitar music that stretches as far as the eye can see. Originally teaming up in a band known as Eternal, the band went into seclusion for several years only to return later as Monster Movie in 2000. Over the course of this decade the pair have slowly aged their sound into something more pop driven than Slowdive and far more ethereal than most pop. Confused? You can hear this for yourself on their latest album, Everyone Is A Ghost.

No, Monster Movie don't sound like Slowdive. Instead, oddly enough, they end up sounding a bit like late period Ride throughout most Everyone Is A Ghost. They might hate me for saying that but really that's not a bad thing at all. You see, no other band took shoegazing, rock and roll, and indie and combined it into something that was palatable for the mainstream quite like Ride did. Here Monster Movie is doing something very similar with great results. So, comparisons aside, Everyone Is A Ghost is still a swirly noisy racket with lush synth arrangements added for good measure. But rather than being a duo of musos who love effect pedals and washed out keyboards more than life, Monster Movie construct something catchy tuneful amongst the haze. Whether they are at their moodiest or at their most upbeat, they manage to wrap their dreamy, distorted guitars around a synthy pop shell making Monster Movie far from being a scary proposition. In fact, Everyone Is A Ghost is so likeable that it's almost impossible not to find the tunes on this record appealing.

Monster Movie do a fantastic job at combining all the elements of music that they love the most into an arty combination of unearthly music with a brilliant pop sensibility. From the moody banjo on, "In the Morning," to the weary seasonal hymn of, "Fall," Everyone Is A Ghost is a well structured album of dream pop that sounds like shoegazing was brought into the future, updated, and sent back. It's a great record and if you've ever considered yourself a fan of the genre, you can't do much better than Everyone Is A Ghost. Revivalism has never sounded so broody and fantastic.
Posted by Paul POP! at 6:21 AM