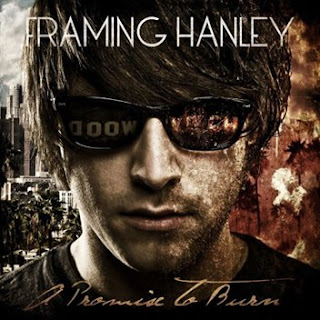 Tennessee's Framing Hanley have evolved and come a long way from their humble beginnings in 2005. Named after a close friend who died in a car accident, the band, with the help of former Creed bassist Brett Hestla solidified their place by being picked up by the Silent Majority Group in 2007 and recording their debut album at the end of 2008. Now two years on from that debut, the band has grown leaps and bounds, taken everything they've learned from their mentor, polished their sound to a near blinding level and released their latest opus, A Promise To Burn.

Packed to the gills with massive radio friendly tunes that are pretty much the definition of "huge rock tunes," A Promise To Burn should be the soundtrack to every teens and tweens life right now. A Promise To Burn is a combination of crunchy metal riffs, soaring ballads, over emotional vocals, and songs that are so precise and sharp they could slice through titanium. Leaving the Creed influences behind, the band has matured into a unit that's slowly beginning to sound as individualistic as a band in this genre can. What does that mean? Well, this is a melodic record beyond all melodicism and if you throw in a few sprinkles of emo and hard core you basically have the ingredients that make Framing Henley who they are and why they sound the way they do and it's really not a terrible thing.

A Promise To Burn is one of those records where you can imagine thousands of people holding up lighters and phones and singing every word to every song while heading for the stratosphere. It's a record that shows Framing Hanley clearly have perfected the knack for writing the big heavy rock song with choruses that even your grandmother knows. What's truly amazing is just how fast they've done this and how they've created a massive hard rock album that's totally geared for cross market perfection. Then again, it shouldn't be a surprise; with songwriting that has been run through the super computer of gargantuan hit writing and those chourses it's easy to see why this band has cemented itself firmly in the uber-emo-rock lexicon. One listen to "Weight of the World," and you'll get the point; it's a song that soars on it's chorus to superstardom and it never comes back.

Framing Hanley are a young band that have snowballed into one massive potential hit factory rather quickly. Their album, A Promise To Burn is an emotional hard rock roller coaster that while sounding a bit like everything else is destined for big things. If you love album oriented rock then Framing Hanley will be your new favorite band and A Promise To Burn will be your new soundtrack.
Posted by Paul POP! at 6:42 AM