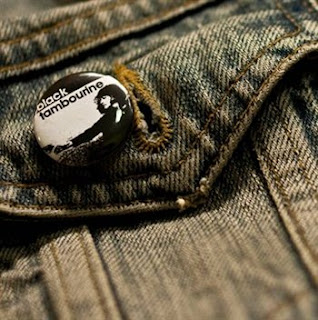 You know you're getting old when bands you totally took for granted a) have greatest hits albums and b) people younger than you have never heard of said band. Such is the case with legendary fuzzy indie pop darlings Black Tambourine. Originally concevied as a pop band in the late 80's and early 90's the very idea of such a thing was unheard of. While Americans were covering themselves in flannel and torn denim, Black Tambourine were analyzing Jesus and Mary Chain, Orange Juice, and Pastels records for secrets. They loved these groups, were influenced by them and almost became the American version of them. But as fate would have it, the band's time on earth was short and within two years everything that once seemed so bright faded out with secrets undiscovered.

As unfortunate as that was way back then, the fine folks at Slumberland records haven't forgotten how great this shortlived band was. The label has kindly gathered together the complete recordings (the second time this has happened) of the band in an effort preserve the recordings and bring fans bang up to date. Titled, Black Tambourine the album takes the original Complete Recordings and makes it even more complete with six additional songs recently unearthed, thus making it a pretty essential noise pop album by default. When you add in the fact that they're actually really, really good it makes the record more important than food.

You see, this bunch of Americans were so far from grunge they probably didn't even know what flannel was. In fact, instead of getting crunchy and angsty, Black Tambourine went the exact opposite direction and created a hazy sheet of distorted indie pop bliss that was ethereal goodness for those of us that appreciated such things back then. The sixteen songs that make up Black Tambourine are pretty much the definition of pure pop perfection and there's not a single duff track here. While many of the tunes are clearly lacking the polish that pollutes much of todays music, the rawness and honesty of the tunes on offer here show that it truly all comes back to just how good the songs are. Thankfully, in the case of Black Tambourine their songs were stronger than steel.

Black Tambourine is a fantastic blast from the past that will serve as a reminder from those of us who remember and an introduction to those who have yet to experience the dreamy noise of the band. Presented in a deluxed remastered edition with the six new tracks Black Tambourine is the sort of record that will have all sorts of accolades poured upon it and should be one of the best reissues of 2010. Essential stuff then really.
Posted by Paul POP! at 9:33 AM