Night Driving In Small Towns With A Serial Killer 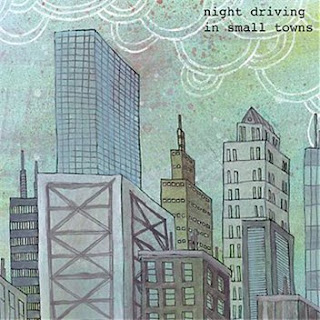 Night Driving in Small Towns are land dwellers. Having moved from small south Georgia towns to the city of Atlanta in 2008, the band has seen its share of topography. So has their music. Having navigated the spaces between artsy folk pop and brazen indie rock the band have come with a hybridized form of both that's oh so sweet. Their latest album takes all that topography and blends it into something intoxicatingly impressive and names it Serial Killer.

Perhaps sounding a bit like Rilo Kiley at times or Cat Power at others, Night Driving's Serial Killer will charm you with it's unhindered songs and melodies that never seem to end. With enough girl/boy interchanges to last a lifetime, Serial Killer at times sounds more like an album of duets rather than an album created by a power trio. Despite what the drummer might think, that's ok, because all three members do contribute to how great this record is. And listening to this record is like listening to the sunrise on a spring morning; crisp and cool with lots of sunshine moments. In other words, Serial Killer is not like it's name at all; far from violent, this is a record with a smile on it's face and some degree of love in it's heart.

Shifting between quiet intimate moments and jumpy indie rock like a band on way to much coffee, Night Driving clearly have a problem sitting still. Mellow moments are followed by upbeat songs and just when you think you're luck has run out, Night Driving hits you over the head with a ray of pop sunshine. It's awesome stuff because they never let any one tempo or influence take control of them and it keeps them moving in a way that never allows Serial Killerto get boring. From the seemingly fitting, "Duet Song," to the jumpy, jangly, and hit in the making, "Serial Killer," Night Driving have stumbled across something during their travels that's awesome. With that said, Serial Killer is a fantastic album that clearly benefits from the fact that this band is a little bit city and a little bit country and isn't afraid to show it.
Posted by Paul POP! at 5:26 AM