Holly Golightly Is in Medicine County 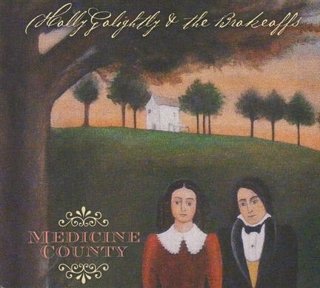 Britain's garage rock queen, Holly Golightly has packed up the garage and moved out to the country, leaving behind the city and even her country behind to settle down in Madison, Georgia of all places. Now living on a farm, Holly Golightly raises farm animals of all kinds as well as the curiosity of her neighbors but still finds time to make the music that's she's known for. This time, teaming up with The Brokeoffs (aka Lawyer Dave), Holly Golightly took her move to the sticks in stride and then recorded her latest album, Medicine County, in a foreclosed and abandoned church near her farm letting that environment dictate the direction of the record.

As one might expect a move from the bustling streets of London to the isolated sticks of Georgia has had an overreaching effect on Holly's music. What resulted on Medicine County is something like a garage rock approach to rockin' Americana. This is not go go boots and mini-skirts garage rock but dirty shoes and overalls gritty Americana. What's that mean and how did it happen? Well, Holly and Dave packed up their equipment, set up shop in that abandoned church and recorded a series of songs here that twang like they're the only souls within thirty miles of her farm. Medicine County has got that country like vibe that's a product of Holly's environment but still manages to retain enough of that raw rock and roll edge to remind you of Holly's garage. What ends up happening is something that's not the sound of London at all, but instead a swampy almost blues laden country rock record that's so in love with America that it wants to be a naturalized citizen.

While Holly Golightly's garage rock stuff is awesome and her trademark, her full on emersion into swamp boogie is impressive and her ability to fully adapt to something that's about as British as the Stars and Stripes is commendable. Medicine County is an impressive effort that is probably more American than most Americans. From the traditional Country Bear Jamboree classic, "Blood on the Saddle," to the slow moving swampy drift of, "Two Left Feet," there really isn't a bad track here. This is how you do Americana and if it's played as well as this album is, I will forever love it. What's really not all that surprising is that it took someone from another country to show not only me but all of us how to do it right. Medicine County is fantastic stuff.
Posted by Paul POP! at 6:27 AM