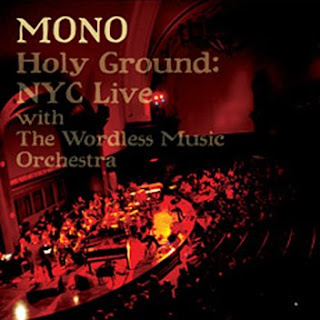 If the thought of Mono's studio albums seem almost too immense for the average listener to deal with then the thought of their live album, Holy Ground NYC Live w/The Wordless Music Orchestrawould just be absolutely, positively overwhelming and complex for their brains to handle. This CD/DVD combo album, is so unbelievably epic, technically brilliant, and texturally amazing that the two discs that this album is spread across is barely big enough to contain it. Holy Ground NYC Live is a mighty and monumental record that will leave all who hear it in awe.

With soundscapes that already stretch beyond the imagination made to sound even bigger with the addition of an orchestra, Mono have stretched the limits of what post rock is and can be. This is a genre defining effort that's absolutely beautiful and creative while remaining colossally true to what Mono are all about. This is the band taking their missives from the great beyond and making them immortal. Holy Ground NYC Live is the sound of eternity, of dreams gone by, of a world in which most can only ever hope to see. This is the world Mono live in and they have truly outdone themselves here by making a record which goes beyond anything they've ever achieved in the past. Holy Ground NYC Live is the very definition of breathtaking.

Throughout Holy Ground NYC Live, like many of their previous efforts, Mono send out waves of noise that overlap upon on each other until they are whipped up into a frenzy of distorted post rock guitar mayhem. What is unlike those previous efforts is how those waves of noise are fully supported by classical instrumentation and arrangements. It's that instrumentation and those arrangements that accompany the songs that give each of Mono's works added texture, depth, and imagination. With strings of all kinds ablaze and pedals working over time, Mono and the Wordless Music Orchestra transport the listener to another world far away from this one; a world that stretches on for an eternity and may actually represent infinity itself.

Holy Ground NYC Live is unearthly and unbelievable to say the least. It's cinematic textures, classical structures and spacial atmospherics help create the universe in which Mono inhabit. It's a wonderful world of noise, manipulated and processed into something much more than just notes arranged into music for your ears; it's a world in which we're invited into and may have difficulty in leaving when the album comes to a close. Staggeringly epic and stunningly enchanting Holy Ground NYC Live will live on forever as the soundtrack to what lies beyond our mortal world. Pretty much essential then for humanity.
Posted by Paul POP! at 6:44 AM

Email ThisBlogThis!Share to TwitterShare to FacebookShare to Pinterest
Labels: mono