Evelyn Evelyn Is A Double Dose Of Weird 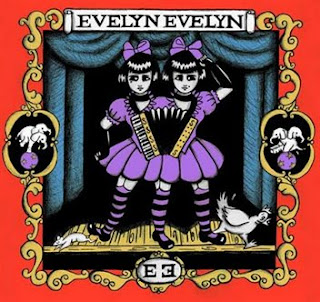 If the stories are to be believed, Evelyn Evelyn are the worlds only conjoined twins singer/songwriter duo on the planet. I'm not sure I totally believe all of that but the duo was apparently discovered by Amanda Palmer of The Dresden dolls and Jason Webley. Which, if you think about it, totally goes along with everything that the Dolls are about. So whether or not you believe the back story to Evelyn Evelyn is up to you, but one thing is for sure the duo is easily one of the strangest musical entities around now and their self titled debut album is easily 80 years too late for the party.

Sounding like it belongs in the twenties somewhere, Evelyn Evelyn, plays out like a strange bizarre time traveling Vaudevillian show that somehow wound up in 2010. Complete with piano rags, theatrical singing, accordions and just about everything else under the sun, Evelyn Evelyn is a strange record that will push you to the brink of insanity and let you go. This is a record that's almost too weird for it's own good and unless you like curiously strange albums that sound like they came from the turn of the last century, then this might just be a little out there for you.

With songs that essentially play out like a sideshow carnival, it's a concept album waiting to happen and for all I know it might actually be a concept album. I mean for god's sake there's a song called, "Chicken Man," and I'll leave it to your imagination as to what that's about. I have no idea what these guys/gals/animals are on about because I can't even figure out what decade I'm in after listening to this.

That being said, I'm not sure what I think of Evelyn Evelyn, it's a twisted tale of music, theater, and story telling and perhaps if you take it as a story wrapped around incidental musical numbers this might actually be entertaining. However, as a pop record this this is out past the twilight zone hanging out with the Dresden Dolls in a dive somewhere getting royally drunk. If you're in touch with your dark side and like tales from there, Evelyn Evelyn might be for you. If, on the other hand, you prefer a world of reason and logic this album might just scare the heck out of you.
Posted by Paul POP! at 6:24 AM