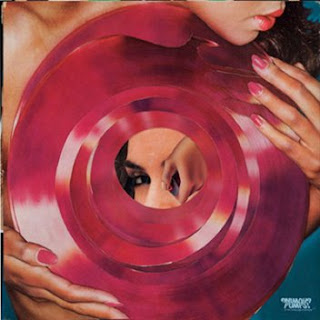 With a somewhat seductive cover that promises something of reminiscent of 70's era adult entertainment, Growing's Pumps is anything but seductive or adult entertainment. This strange amalgamation of sounds is like something out of a broken video game circa 1982 and is more than likely the weirdest record you are going to hear in a very very long time. Sitting somewhere between Armageddon and Y2K on endless repeat, Growing edit their way through songs at 7 frames per second, adding enough drone, chopped up beats and noise to suggest that we're all losing our minds. Needless to say, Pumps will either be seen as completely brilliant or banned by the government as a musical rouge use by terrorists for mind control.

Growing really don't make music so much as piece it together utilizing samples, effects laden synths, and guitars that sound as if they only have one string. Pumps, as a result, sounds as if Orbital were lost in Mario Brothers and were never able to find their way out. There are plenty of techno elements as well as rock elements throughout this record but they're never allowed to develop and blossom into something musical or even comprehensible. Instead they're crammed together with something else be it more noise or samples in an attempt to make some sort of musical patchwork quilt. At times it nearly works because somewhere lost in the never-ending tangle of tape and cords there lies bits and pieces of a song that almost make sense. More often then not though, the sounds of each "tune," kind of flow into each other making this sound like one long Windows 95 fueled death procession. Is this pop music? Most certainly not. Is Pumps entertaining, by some strange perverted chance? Yes; the shambolic edits, the effects everywhere, the demo mode beats all come together to create this strange bleepy and blippy world where pixilated people roam free jumping over everything.

If you ever wondered if the characters in video games were real, Pumps proves that they are and that this is the music that they listen to. Twisted, bizarre, and barely musical, Pumpsis an excursion into what you can do with alot of time and an editing. Enjoyable in an arduous fascinating sort of way, Growing have created a record that challenges every preconceived notion as to what music actually is and can be. That being said, Pumps is definitely for the more adventurous listener with a lot of Tylenol at the ready.
Posted by Paul POP! at 7:00 AM

Email ThisBlogThis!Share to TwitterShare to FacebookShare to Pinterest
Labels: growing