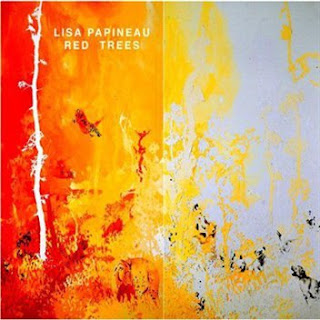 Lisa Papineau is anything but your standard run of the mill singer songwriter. This vocalist, songwriter, wunderkind extraordinare is known for her vocal contributions to Air and M83 as well as teaming up with Mars Volta member Juan Alderete de la Pena in Big Sir and those are just some of things she's worked on that have helped shaped her unusual approach to songwriting. Her latest album, Red Trees, sees a whole host of people returning the favor and collaborating with her to create a varied and dense album that's so far away from being just another singer/songwriter record it's hard to even type that phrase.

Utilizing the skills and talents she's accrued while working with just about everyone under the sun, Lisa Papineau, has developed a sound that's unique and truly her own and somewhere out in left-field. Mixing ambient textures, down tempo beats, folky melodies, foreign language, off kilter pop hooks, and just about anything else she can think of Papineau pastes together songs that are unusual and nearly Bjorkian in their make up. Red Trees is intriguingly good with lots of left and right turns coming at sudden points throughout the record. You're never quite sure of what you're going to get on the next song and it makes for some exciting listening. She'll keep you guessing and that's half the fun.

Her unpredictability never allows time for a dull moment on Red Trees but I would say Papineau is truly at her best when she gets close to stuff that sounds like it's come straight from the Air or M83 back catalog. Her more "beat" oriented stuff seems to suit her voice perfectly and while she's a perfectly fine singer/songwriter I love the less acoustic stuff. Lush and intense, Red Treesis a gorgeous record that is as fragile as it is all-consuming and as beautiful as it is atypical; definitely not your average singer songwriter album then.
Posted by Paul POP! at 5:28 AM