Andrew Collberg Pulls A Quick One 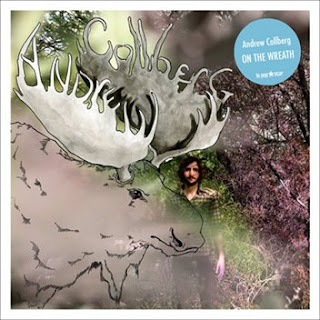 Andrew Collberg's record, On the Wreathwas a bit of a shock, not from a sound or good/bad perspective but because the German label, that specializes in French pop (Le Pop Musik), has signed a Swedish born, Arizonian to it's label. Confused? You probably should be, because this cross cultural signing doesn't really fit in with the labels ongoing, Le POP!series in any way shape or form and in fact is quite the opposite. Collberg is about as far away from sounding like French Chanson music as Arizona is close to Paris. Nonetheless, this interesting musical anomaly has produced one of the most likeable folk records I've heard all year with On the Wreath.

As you undoubtedly know, if you read this column regularly, I don't like folk, Americana, alt-country or anything of the like, but On the Wreath is different...this hit me right between the ears with a sort of Elliott Smith, Beatles, Dylan like jangly song in it's heart. Sure, this might be considered folk by the genre police, but it's folk informed by the long history and depth of Swedish indie pop along side an overwhelming sense that 70's AM Radio is as vibrant as ever. With horns, lilting strings, lush arrangements and a whole host of songs that are anything but whiny ballads, On the Wreathis a fantastic record with an overpowering sense of what makes a pop song tick. Collberg's slightly lazy vocals meshed with all his jangly acoustic work and a heart the size of Texas equate to songs being as wide open as the Arizona desert or like Elliott Smith at his most charming.

On the Wreath is a really nice surprise. Andrew Collberg clearly gets how to write a song and take a slowed down, dusty approach to writing them and making them his own. A song like, "Plastic Bows," catches your ear thanks to an upbeat chorus that features a chiming horn that's about as unforgettable as your ABC's. It's a touchingly happy go lucky tune that's sunshine on a cloudy day and one of the highlights of On the Wreath. Collberg has a warm and inviting voice and his songs are much the same, he doesn't write overly complicated tunes but instead takes a simple folksy approach and relies on bits and flourishes to bring them home. Whether it's banjo, organ, horns, etc he uses it all to give On the Wreath a sense of depth and breadth that helps elevate the record to something far more that just another acoustic record.

It's been a long road for Andrew Collberg, but on On the Wreath he proves that the journey has been worth it. This album might not be French pop but it is great music and no matter where it's from or how it got here it's well worth checking out. Andrew Collberg's On the Wreath is the kind of folk it's definitely ok to like. Viva le America.
Posted by Paul POP! at 6:26 AM