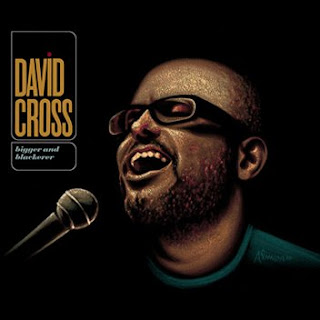 David Cross is everywhere at this point in his career. The guy has made a name for himself on TV (Arrested Development), Movies (Eternal Sunshine of the Spotless Mind), as well as his ol' standby...stand up comedy. Cross is so famous at this point that even your parents probably know who he is or at least would recognize his voice and/or face. It's pretty cool when you think about it, because he's like an indie sort of thing that went mainstream by doing it the old fashioned way...he earned it.

When Mr. Cross isn't keeping himself busy on one of the screens (silver or small), he falls back to old fashioned standup. His recently released album, Bigger and Blackerer is a bloody brilliant laugh out loud kind of affair that will more than likely offend those who see things from a right side point of view. His political stances on controversial topics, his admitted drug use, funny family tales all play perfect fodder for his routine and they are seriously hilarious bits. This isn't raunchy in a Andrew Dice Clay sort of way, but it's edgy enough while being more like a casual observational stream of consciousness sort of thing that might just very well make you cry. His take on the health care debate is jaw droppingly funny even though it was recorded BEFORE it was passed, his double, triple, quadruple crazy bit had me weeping, and the perplexing puzzle of Coor's light is amazing.

He might be world famous but after listening Bigger and Blackerer it sure hasn't gone to his head. In a day and age where things aren't exactly overwhelmingly happy, David Cross is here to make you bust a gut. Bigger and Blackerer is brilliant and pretty much the funniest thing you're likely to hear on record this year. If you like to laugh...and who doesn't...you'll find this record the perfect companion to driving down I-95 during rush-hour. Oh and if you prefer to watch Mr. Cross...Bigger and Blackerer is also available on DVD with completely different but equally as crazy material than the CD version of the album. Confused...yeah me to...but my guess is that's just the way he likes it
Posted by Paul POP! at 6:24 AM