The Gentle Guests Cast Off Their Human Form 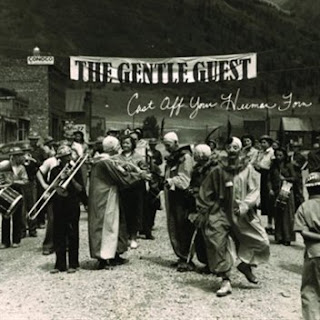 The Gentle Guest sound like they've just come in from a bar fight and need a bit to drink. This Wisconsin based band take all the best elements of rockabilly, cow-punk, jazz, folk, theatrical rock and smash them together to get something like a long night of whiskey drinking and the mayhem that follows. Reckless, edgy, and filled with energy The Gentle Guest's plough their way through their latest album, Cast Off Your Human Form as if they were doing just that.

The cover of Cast Off Your Human Formshows a bizarre image of clowns, musicians, and children in the street somewhere in a state of confusion and that's kind of how this album plays out. In other words, it's shambolic at best and seems like it's destined to head off into ten different directions at once. While it never really does head off everywhere, the songs that make up this record are twisted tales of folklore that The Gentle Guests have made their very own with a crazy and rambunctious twist.

Frantic, frenetic and sounding like a series of murder ballads played with no sense of remorse, The Gentle Guest have come up with a great record with Cast Off Your Human Form.
Posted by Paul POP! at 6:42 AM