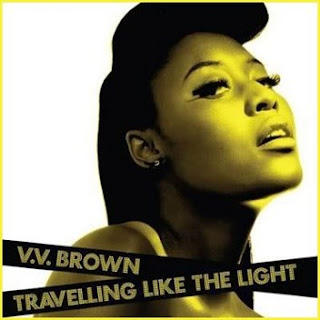 VV Brown has finally made it to these shores and it's just in time. With winter over and the sun shining everywhere, the need for a perfectly upbeat, soulful, pop record is great and thanks to this already gargantuanly popular Brit, our wants and desires have been met. Travelling Like the Lightis the debut album from one of the most exciting artists to come along from tne neu-nu-neo-soul movement err since about six others from London. What makes VV great? Well you see this girl defiantly goes against the grain and mixes classic soul, rock and roll, indie, dance, pop and just about everything else to come up with an addictively sweet concoction that's groovy in a 60's kind of way.

Perhaps sounding like Kate Nash, Lily Allen, and Remi Nicole but dressed in neon and a quiff that Morrissey would die for VV is a superstar in the making. Her voice shifts from diva, to 60's soul goddess, and then to pop princess like a Porsche 911 Carera shifts gears; quickly smoothly, and oh so impressively. The girl has a set of pipes and she coats every song on Travelling Like the Light with her syrupy Northampton accent. She's brilliant and her songs are so stupendously catchy that you should probably stay away from them if your immune system is down.

Travelling Like the Light is the sound of the 60's stuck in the Tardis w/John Pertwee and let loose on the 21st century. Yes, the production is modern and crisp, but the approach and songs sound as if Holland, Dozier, and Dozier wrote them for VV Brown somewhere around 1967. From the somewhat appropriately titled, "Back In Time," to the near swing pop of "L.O.V.E," Travelling Like the Light is just pure pop goodness that's unspoiled fun. Like classic soul records from the past, VV Brown's simple but effective approach hits you right between the ears and after about three songs you're hooked like a crack addict. VV Brown's Travelling Like the Light is pretty much the classic soul revival album of 2010 and one of the better pop albums as well; fantastically fun stuff that has summer written all over it.
Posted by Paul POP! at 6:11 AM