That's A Negative on The Leapfrog, Captain America 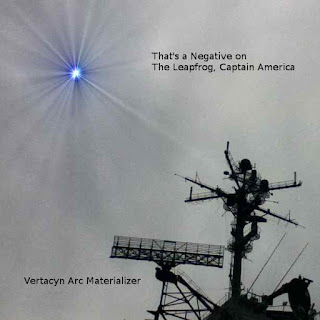 Clearly one of the best band names ever, That's A Negative on The Leapfrog, Captain America is a band that must have a hard time putting it's logo on t-shirts much less album covers but here they are with their even odder named album Vetracyn Arc Materializer. Spatial issues aside, to say this album and band are unusual would be an understatement as That's A Neagative seem to be the victims of one too many alien abductions and are missing so much time, their songs sound like montages of what they've missed. Vetracyn Arc Materializer is an atmospheric garage excursion into the dark recesses of your mind and it's so unusual and so potentially chaotic that you might live long enough to return.

Vetracyn Arc Materializer is the sort of record that headphones were built for. Whether it's the garage rock that's been fed through the alien production hardware they use or the spacey post rock ambiance they create there is so much going on in these songs that you'll not want to miss a single thing. Bizarre, twisted, psychedelic, and excellently played Vetracyn Arc Materializer is the kind of strangeness musicians will love. From fuzzed out guitars to goats to songs about pitch and yaw That's A Negative attack music from so far out in left field it might not even be fair to call it a field. Listening to Vetracyn Arc Materializer can't help but make me wonder if during one of their, obviously many, alien abductions they resurrected Syd Barrett. This has his imagination written all over it.

Somewhere way outside of the mainstream is where That's A Negative comes from. They create rock and roll that's been lost in space for millennia. It's rough, raw, epic, widescreen, technical, strange, and a host of other adjectives it would take me all day to list. Needless to say Vetracyn Arc Materializer is an intriguing and good listen. If you like things way out...like way out...you'll find That's A Negative the sort of group you can open up wormholes to...and if you don’t believe me it looks like they’ve done just that on their cover.
Posted by Paul POP! at 1:58 PM

Email ThisBlogThis!Share to TwitterShare to FacebookShare to Pinterest
Labels: that's a negative on the leapfrog captain america