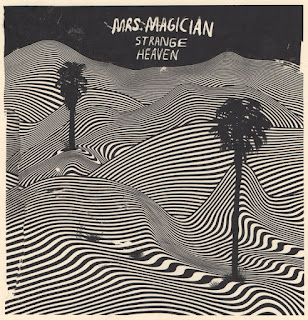 Mrs. Magician are a band so lost in a time warp you'd swear that they had either flown around the sun one too many times or tour in a Tardis. This garage rock band sound so much like they've come straight from the late 60's that it's hard not to picture them in slim fit suits and mop top haircuts. Their album Strange Heaven is an absolutely brilliant record that sees the band picking up the torch left by bands like the Caesars and running with it (full speed around the sun). This is the sound of the past magically appearing in the present and rocking the heck out.

Strange Heaven is a jangly Mersey Beat influenced, surf sounding, garage rock record that kicks so much butt it's hard for it not to kick yours. Guitars jangle, twang, and echo all over the place, the back beat of the band push things at a danceable pace, and the vocals sound so melodically vintage that someone needs to check these guys’ birth certificates. If the Drums were less indie and the Caesars were a tad less rough and they both combined in a Transformer's kind of way they would become Mrs. Magician and that's one spell you'd like to see cast.

Mrs. Magician has come up with a melodic, groovy, raw rock and roll treat that's catchy and has an old soul. This is the 60's brought to the 10's via some sort of magical form of transport that the band are obviously keeping secret. It's no wonder these guys have the word Magician in their name; they work musical magic, transport it through time and allow Strange Heaven to be the best record that was made in 1966 but never released. Sonic perfection is what being trapped in Mrs. Magician's Strange Heaven is all about and I for one am glad to be stuck there.
Posted by Paul POP! at 9:59 AM