AU Turn On Both Lights 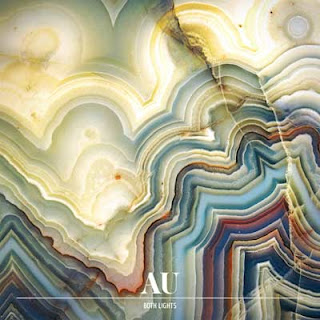 AU or gold to you and me aren't quite as shiny and valuable as the name would imply. Nah, this indie rock band is out of their minds quite honestly and their third album Both Lights is amongst the strangest oddest things I've heard this week. Consisting of a variance of ambient, noise, post-gazing, and nightmares committed to tape AU create soundscapes that challenge, grate, and potentially drive you up a wall.

Both Lights is a twisted dream that has many ins and outs and many scenes with in it and AU wander through each of them giving the dark recesses of your mind music to go along with it all. Could this band use some form of psychotherapy? Yeah, more than likely but one would imagine if they did get therapy they wouldn't be the same band and their records certainly wouldn’t sound like Both Lights. Whether or not I like this is up for debate. It's a bit too chaotic and a bit too noisy for me. I appreciate some of the more ambient passages but songs that sound like guitars being shredded into oblivion, detached ghostlike vocals reverberating over sheets of aluminum, mysterious sounds that can’t be placed all seem to be more like performance art than something I'd want to listen to.

AU is without a doubt in a league of their own. With noise that at times qualifies itself as being musical and at others just being something in the background clanging aimlessly AU almost sound like miners at work. As for Both Lights whether or not you'll like it will totally depend on your tolerance for the odd and unusual. Right now...I don't have much tolerance for either.
Posted by Paul POP! at 2:02 PM