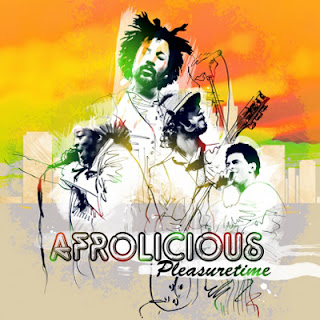 Despite the group’s name being Afrolicious isn't at all what you might think they would be. The thing is so not what's expected that even the cover is deceiving. You can't help but look at this thing and think, "Ah, Afrolicious cool name for a reggae band." Holy miscalculations Batman...it's so much more than what you think. Their second EP Pleasuretime is undoubtedly influenced by dub and reggae but it’s not either. Rather, this record is a chilled out, deep house vacation into the haze of your mind.

All that being said, Pleasuretime is a brilliant EP. With an endless groove that's pretty much established within the first minute or two of the record, Pleasuretime digs deep into the chilled tropical vibes and comes up being as Balearic as Ibiza on a summer Saturday. Afrolicious have released on heck of a little record here and its hyrbid use of dance, dub, reggae, and jazz is just about unforgettable. After two super impressive EP's that takes deep house to the beach, it's time for Afrolicious to release a full length of new material. I'm sure when that day comes the record will be massive but until that day, enjoy Pleasuretime.
Posted by Paul POP! at 2:00 PM

Email ThisBlogThis!Share to TwitterShare to FacebookShare to Pinterest
Labels: afrolicious