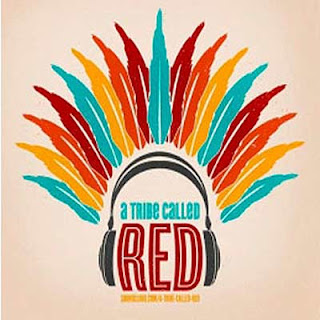 A Tribe Called Red is one of the more unusual groups on the planet. I've not really heard anyone combine tribal chanting, electronics, and sub bass until now and I have to say it's very, very unusual. The melding of ancient and modern makes for some interesting music and A Tribe Called Red's self-titled album is just that...fascinating stuff.

Taking a percussive form of dance music, dubstep, and then mixing it in with Native American drum circles A Tribe Called Red has this primal instinct about them that permeates everything they do. It all sounds so primitively modern and so unusual that you kind of just have to sit there and let it all wash over you. I'm not really a hundred percent sure that I like it but it does intrigue me. It's just a little too odd and doesn't always seem to mesh at times. In a time when dubstep has reached mainstream acceptance it's up to producers to find new ways to separate themselves from the pack, so, I totally appreciate wheat A Tribe Called Red are trying to do. I just don't think the experiment works out to well sometimes.

A Tribe Called Red gets kudos for being different. No one is doing what they're doing and my guess is with some refinement they can really tap into something unique and rock it. For now though, they seem to be in an experimental stage with hit and miss results.
Posted by Paul POP! at 10:02 AM

Email ThisBlogThis!Share to TwitterShare to FacebookShare to Pinterest
Labels: a tribe called red